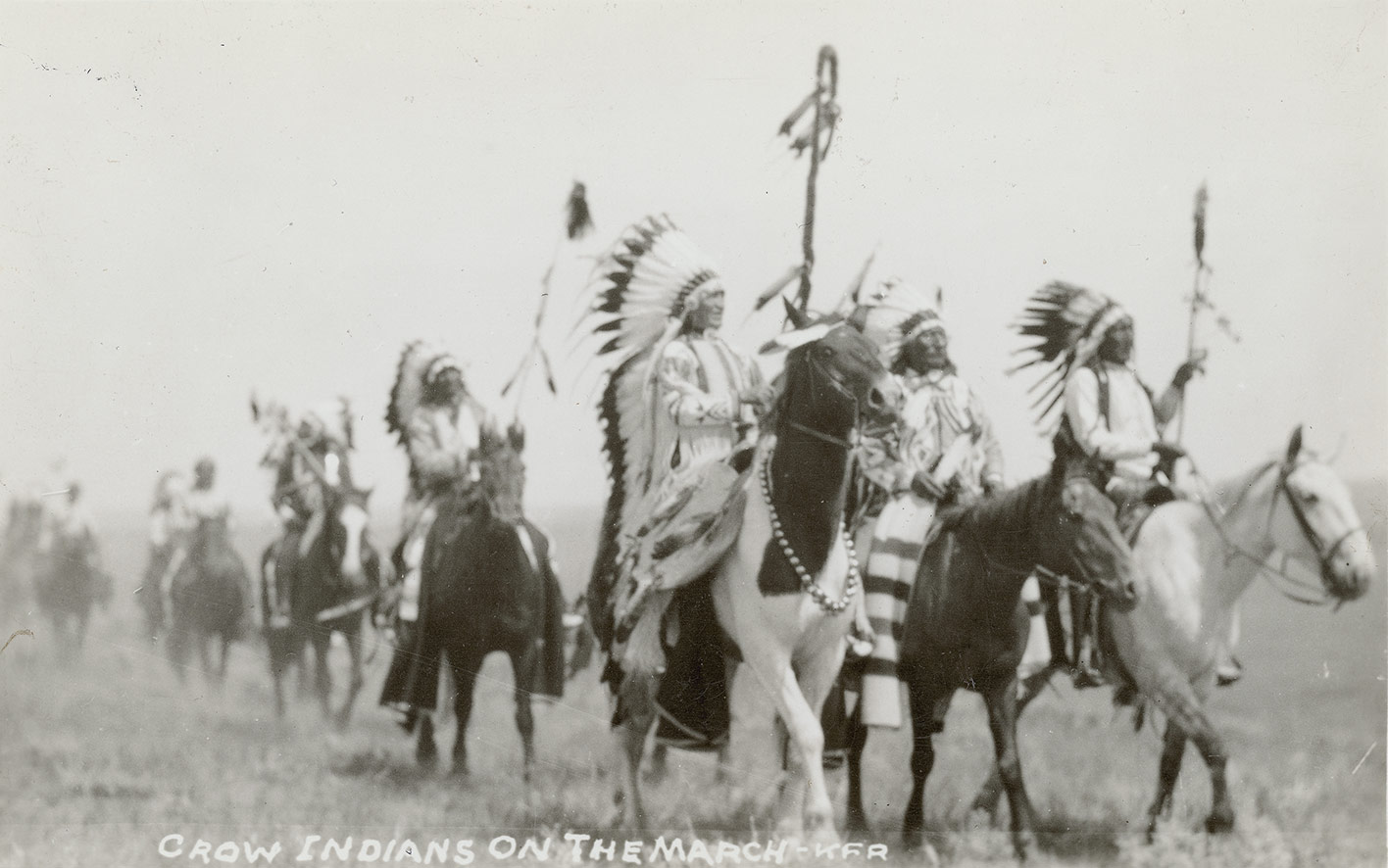 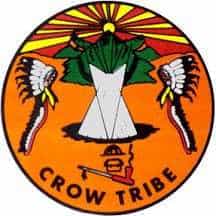 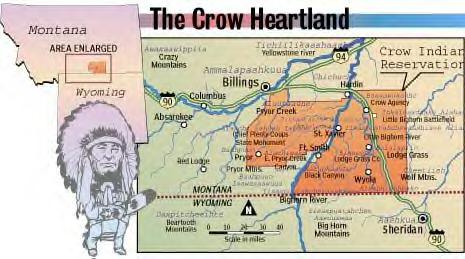 The Crow are a Siouan people who originally occupied southern Montana and northern Wyoming area. The Crow people were called “handsome people” by the French. The Crow were known for their fine physical appearance and beautiful clothing. The Crow were a horse-riding, buffalo hunting people.

The Crow nation was a large and powerful nation. They were bitter enemies of the Lakota. Crow scouts were often used by the US Army. It was Crow scouts who led Custer to the Little Big Horn.

The Crow Reservation is in south-central Montana, bordered by Wyoming on the south, with its northwestern boundary about 10 miles from Billings. About 75 percent of the Crow tribe’s approximately 10,000 or more enrolled members live on or near the reservation. Eighty-five percent speak Crow as their first language.

This tribe was called “Apsaalooke,” which means “children of the large-beaked bird.” White men later misinterpreted the word as “crow.”

Chief Plenty Coups was the last chief to gain that status in the traditional Crow manner. He lived until 1932, leaving his land and home as a park for all people.

For many years the vast coal deposits under the eastern portion of the reservation remained untapped. One mine is now in operation and providing royalty income and employment to tribal members. The Crow operate only a small portion of their irrigated or dry farm acreage and about 30 percent of their grazing land. They maintain a buffalo herd of 300 head.

Crow (trans., through French gens des corbeaux, of their own name, Absároke, crow, sparrow hawk, or bird people). A Siouan tribe forming part of the Hidatsa group, their separation from the Hidatsa having taken place, as Matthews (1894) believed, within the last 200 years. Hayden, following their tradition, placed it about 1776. According to this story, it was the result of a factional dispute between two chiefs who were desperate men and nearly equal in the number of their followers. They were then residing on Missouri river and one of the two bands which afterward became the Crows withdrew and migrated to the vicinity of the Rocky Mountains, through which region they continued to rove until gathered on reservations. Since their separation from the Hidatsa their history has been similar to that of most tribes of the plains, one of perpetual war with the surrounding tribes, their chief enemies being the Siksika and the Dakota. At the time of the Lewis and Clark expedition (1804) they dwelt chiefly on Bighorn river; Brown (1817) located them on the Yellowstone and the east side of the Rocky mountains; Drake (1834) on the south branch of the Yellowstone, in lat. 46º long. 105º. Hayden (1862) wrote: “The country usually inhabited by the Crows is in and near the Rocky Mountains, along the sources of Powder, Wind, and Bighorn rivers, on the south side of the Yellowstone, as far as Laramie fork on the Platte river. They are also often found on the west and north side of that river, as far as the source of the Musselshell and as low down as the mouth of the Yellowstone.”

According to Maximilian (1843) the tipis of the Crows were exactly like those of the Sioux, set up without any regular order, and on the poles, instead of scalps were small pieces of colored cloth, chiefly red, floating like streamers in the wind. The camp he visited swarmed with wolf-like dogs. They were a wandering tribe of hunters, making no plantations except a few small patches of tobacco. They lived at that time in some 400 tents and are said to have possessed between 9,000 and 10,000 horses. Maximilian considered them the proudest of Indians, despising the whites; “they do not, however, kill them, but often plunder them.” In stature and dress, they corresponded with the Hidatsa and were proud of their long hair. The women have been described as skillful in various kinds of work, and their shirts and dresses of bighorn leather, as well as there buffalo robes, embroidered and ornamented with dyed porcupine quills, as particularly handsome. The men made their weapons very well and with much taste, especially their large bows, covered with horns of the elk or bighorn and often with rattlesnake skin. The Crows have been described as extremely superstitious, very dissolute, and much given to unnatural practices; they are skillful horsemen, throwing themselves on one side in their attacks, as is done by many Asiatic tribes. Their dead were usually placed on stages elevated on poles in the prairie.
The population was estimated by Lewis and Clark (1804) at 350 lodges and 3,500 individuals; in 1829 and 1834, at 4,500; Maximilian (1843) counted 400 tipis; Hayden (1862) said there were formerly about 800 lodges or families, in 1862 reduced to 460 lodges. Their number in 1890 was 2,287; in 1904, 1,826.

The Crows have been officially classified as Mountain Crows and River Crows, the former so-called because of their custom of hunting and roaming near the mountains away from Missouri river, the latter from the fact that they left the mountain section about 1859 and occupied the country along the river. There was no ethnic, linguistic, or other difference between them. The Mountain Crows numbered 2,700 in 1871 and the River Crows 1,400 (Pease in Ind. Aff. Rep., 420, 1871). (Info from http://www.franksrealm.com/sivu-indians-crow.html)